2. Inflation At 8% & Rising Plus Energy Bills & NI Going Up In April

Not got the survey link then email ballotenquiries@neu.org.uk with your d.o.b, postcode, school and email.

If you teach to 68 (when you can retire and get the full pension), the last 10 years of pay cuts in real terms will add up to your wages being reduced by a staggering … OMG … if you are:

2. Inflation At 8% & Rising Plus Energy Bills & NI Going Up In April

Inflation is now at 8 % RPI and rising. National Insurance and Energy Bill are set to increase massively this April.  The cost of living in London makes all this worse. That’s why the DfE has now failed for 8 consecutive years to meet its recruitment target for new ECTs (formerly known as NQTS).

* A third of all teachers leave the profession for good within 5 years.

* 60% of us are serious thinking of leaving the profession.

* Moving on to UPS has got progressively harder each year.

That’s Why Our Profession, For The Sake Of Our Students, Needs A Proper Pay Rise

Our pay campaign starts with this survey. For it to be effective we need you to complete it. We are campaigning for 8% for all this year not just ECTs and 8% next year.

*The NEU uses Black in a political context to encompass “all members who self-identify as Black, Asian and any other minority ethnic groups who do not identify themselves as white“. When we were learning how to create and deliver online lessons, they partied! 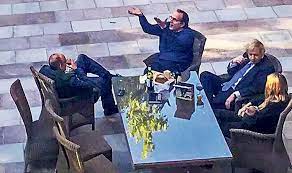 One Rule For Them Another For Us!

One response on “How Scottish teachers won a 13.5% Pay Rise?”